Legendary London band, Squeeze hosted a pop-up gig in the middle of London on a warm summers day. Our crew took to the streets and produced a enraged Facebook Live Video to promote OnBlackHeath Festival

Influence Digital and the management of OnBlackheath had a fantastic idea to get one of their headline acts, Squeeze, to turn up a location in London for a surprise gig. Squeeze and OnBlackHeath told their Facebook following where they were going to be 24 hours in advance and a lot of people flocked to see them.

Originally our idea was to film the whole gig and put it out as a Facebook Live filmed from multiple cameras. Last year, we invested money in some clever kit that allows us to put several cameras into a mixer and broadcast it as live video to Facebook. It even lets us preview what’s happening on all the different cameras so we can switch to the best angle as and when we need to. We shot several Facebook Live videos for ASOS using this kit.However, in a crowded street with no solid internet connection, we wouldn’t be able to reliably shoot, mix and hold a connection for Facebook Live, so we set about finding a solution that was better, more reliable and didn’t cost a fortune.

Using a specialist software platform, we were able to broadcast a video we had already shot as if it was going out as a Facebook Live broadcast. The advantage of this was that we had all the lovely reach and engagement of a Facebook Live video, but everything was more controllable. We were able to mix the cameras perfectly, apply a colour grade to the footage to make it look incredible, cut in key shots which otherwise wouldn’t have been in the video, and correct the audio.

This technique also helps in case of any mishaps such as bad language or whatever vulnerabilities a live broadcast might have. Of course, the disadvantage of this is it’s not technically ‘live’, but in most cases it doesn’t matter. Oh, and lastly it can be broadcast from a place with a solid internet connection to ensure your video doesn’t randomly drop offline, which is a big risk with Facebook Live videos. 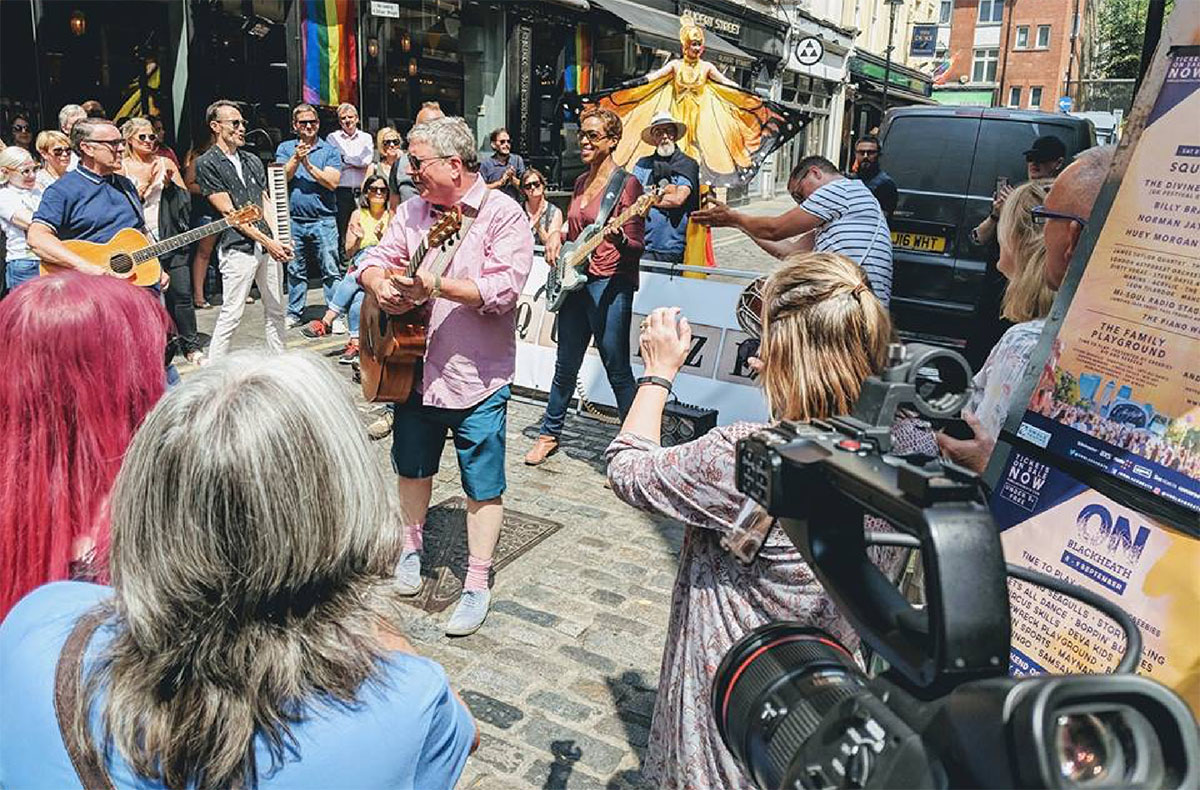 Let’s take an an award ceremony as an example. If the broadcast goes out 20 minutes after the winners are announced, it probably won’t matter too much. The audience that are attending know it’s not live, but the audience that are watching in will likely feel grateful to be a part of it. Only in the cases where you need to interact with your audience does a faux live become an issue. The presenter obviously can’t mention people in the video but they can do it in the comments instead.

Check out the Squeeze Playlist over on Spotify

OnBlackheath is a festival based in London… and if you hadn’t guessed, it’s on Blackheath. This festival has carved out its own little niche with a mix of local and international artists alongside fantastic food and lots of fun stuff to do.
For this project we worked on behalf of Influence Digital, an incredible social media agency who we regularly partner with.